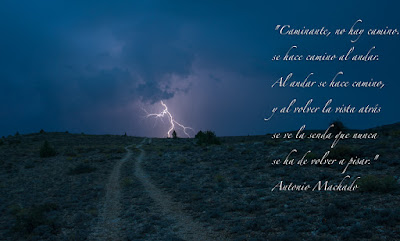 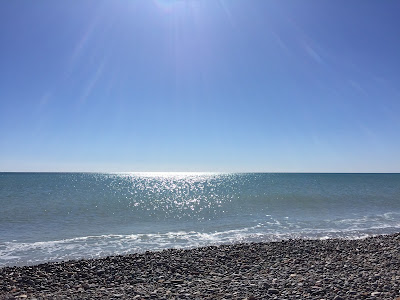 Then return where I belong
“Nací en el Mediterráneo”

I return where I belong
“Nací en el Mediterráneo”

Perhaps because my childhood
Keeps playing on your beach,
And hidden between the canes
My first love sleeps,
I carry your light and your scent
Wherever I go
And bunched up in your sand
I keep love, games and sorrows.
I, that in my skin have the bitter
Taste of eternal weeping,
That have spilled in you one hundred towns
From Algeciras (town in Cadis province Spain) to Instanbul,
So that you can paint in blue
Their long nights of winter.
From the force of misadventures,
Your soul is deep and dark.
To your red dawns
My eyes became accostumed
Like a curve to the path...
I'm a singer, I'm a liar,
I like the game and the wine,
I have the soul of a sailor...
What else can I do?
I was born on the Mediterranean
And you come near, and you leave
After kissing my small village.
Playing with the tide
You leave, thinking of returning.
You're like a woman
Perfumed with tar
That one misses and wants
That one knows and fears.
Ay...
If one day for my badness
The grim reaper comes to look for me.
Push my boat to the sea
And let the storm
Discard it's white wings.
And bury me without pain
Between the beach and the sky...
Oon the slope of the hill
Higher than the horizon.
I want to have a good view.
My body will be a path,
I will give green to the pines
And yellow to the genista...
Close to the sea. Because
I was born on the Mediterranean 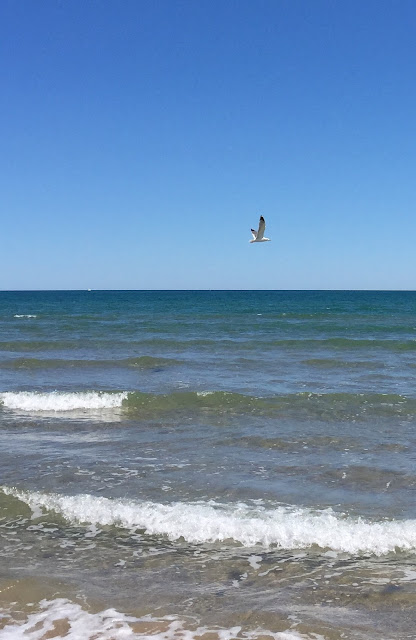 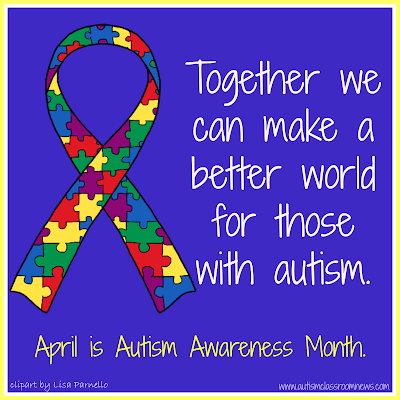 "The first National Autism Awareness Month was declared by the Autism Society in April 1970.

The aim of this month is educate the public about autism.

Autism is a complex mental condition and developmental disability, characterized by difficulties in the way a person communicates and interacts with other people.

Autism can be present from birth or form during early childhood (typically within the first three years).

Autism is a lifelong developmental disability with no single known cause.

The 'Puzzle Ribbon' is the symbol for Autism Awareness and is promoted by the Autism Society as means of supporting awareness for autism.

The Puzzle Ribbon may take the form of a pin attached to clothing, a fridge magnet or a sticker and are available to purchase from the Austism Society website"  www.whathealth.com 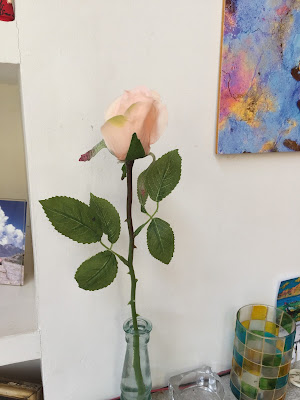 As we go marching, marching
In the beauty of the day
A million darkened kitchens
A thousand mill lofts grey
Are touched with all the radiance
That a sudden sun discloses
For the people hear us singing
Bread and roses, bread and roses

As we go marching, marching
We battle too for men
For they are women's children
And we mother them again
Our lives shall not be sweetened
From birth until life closes
Hearts starve as well as bodies
Give us bread, but give us roses 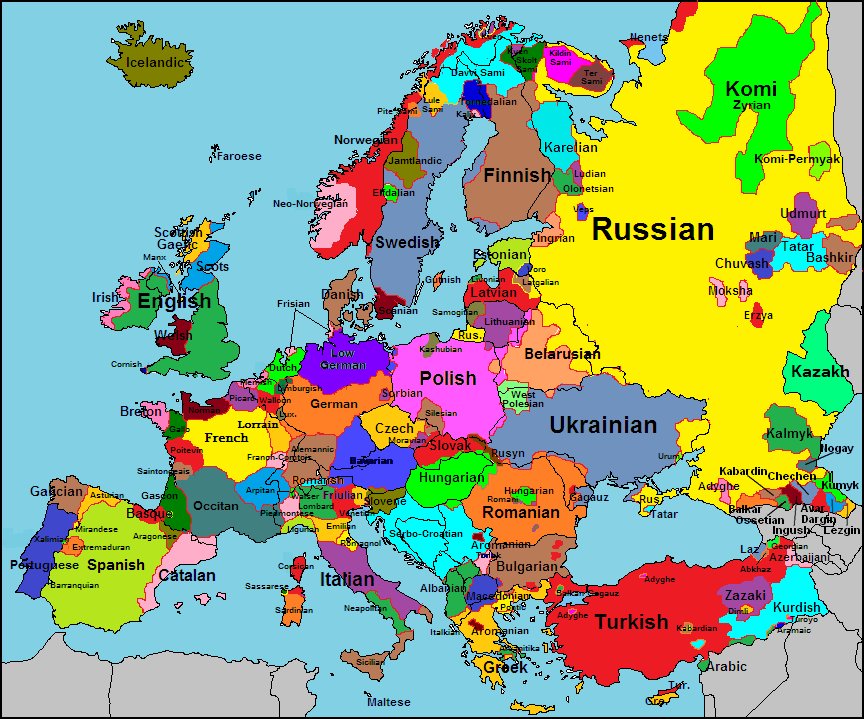 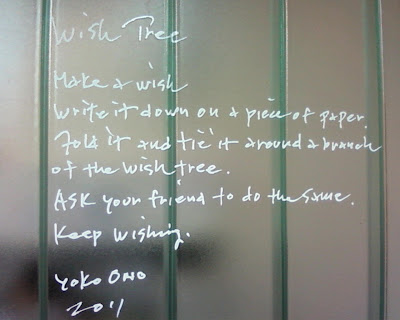 Welcome to Class Dojo
Where you do amazing things!
It's awesome in Class Dojo.
We feel like kings and queens. 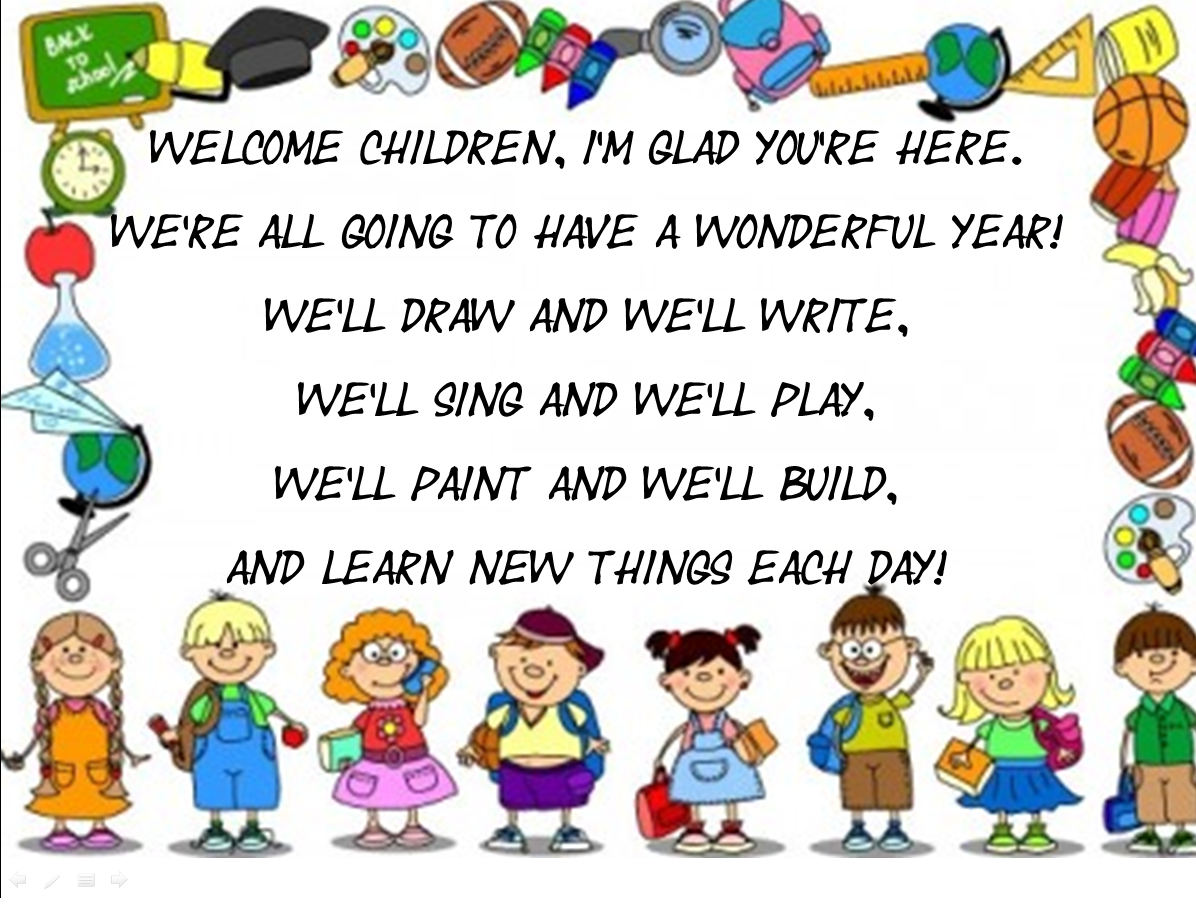 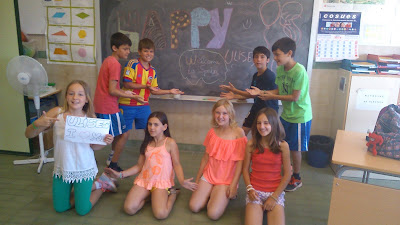 It’s a pleasure to be back with you, dear students, in La Caraba after spending two weeks in the Valencian region of Spain. During those two weeks I enjoyed  visiting with my very dear friends and relatives in Valencia and Quart de les Valls. 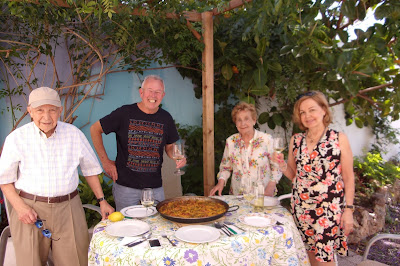 In this article I give my impressions during the trip, which  started with an adventure: My flight between Barcelona and Valencia was cancelled, and after waiting several hours the airlines routed me to Valencia through Palma de Mallorca, the exotic island in the Mediterranean Sea. I always wanted to see the island, because Palma is also the name of the town in Cuba where I was born.

Finally I arrived in Valencia, where once again I admired the great variety of buildings and streets. There are sections like the Old City where some structures date back to before the Middle Ages, and yet, where you find the highly futuristic City of Arts and Sciences, with buildings that seem to be centuries ahead of our time. 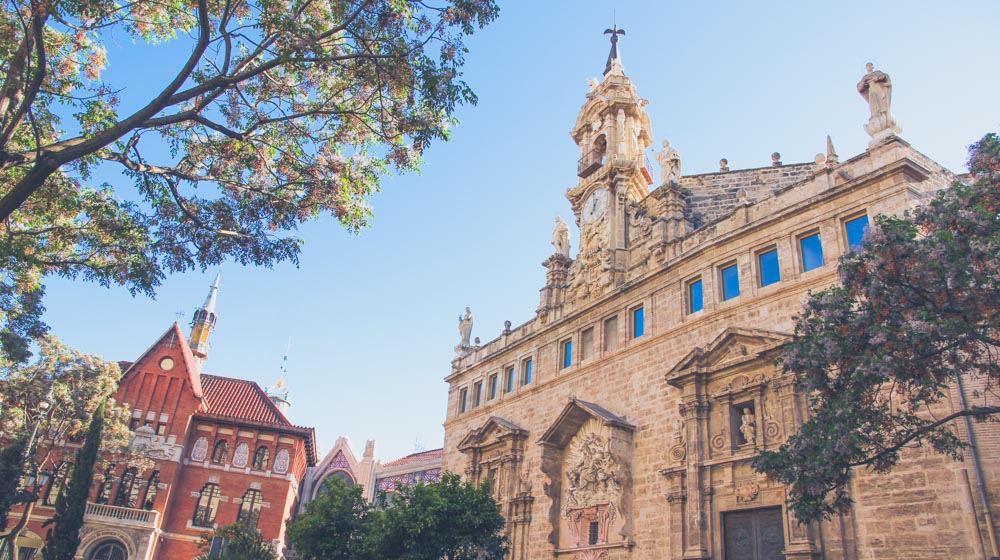 I enjoyed visiting a land where people live happily, enjoying the fruits of the past and looking forward to the wonders of the future. In the evenings I enjoyed walking in in that park where Valencians changed the course of its river and in its place built the delightful Jardines de Turia with its majestic Paseos.

The day I arrived in Valencia was my birthday. The Gil-Puerto family gave me the most wonderful Happy Birthday!! Of course, the paella was prepared by the incomparable Benifairó family, who still remembered me from a previous visit.  There was the traditional song, “Happy Birthday to You” and the blowing of the candles. What a memorable birthday that was! 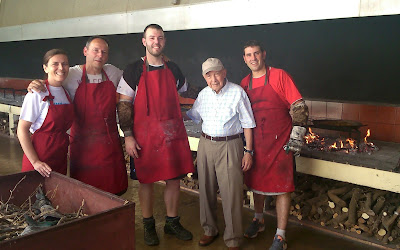 I am sorry I did not have a chance to meet many of you during my trip, however, I was pleased that Mrs Puerto introduced me to some of the students we met while we were touring the beautiful town of Quartell. 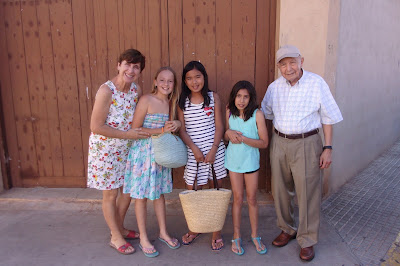 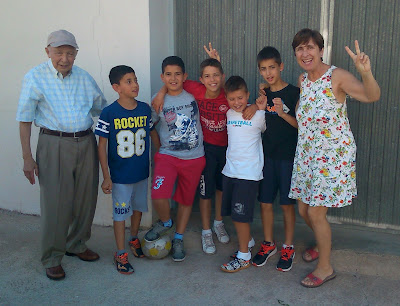 As we toured the valleys, it was delightful to see the crops of orange trees gleaming, with the distant mountains as a background and the ever beautiful Mediterranean on the opposite side. 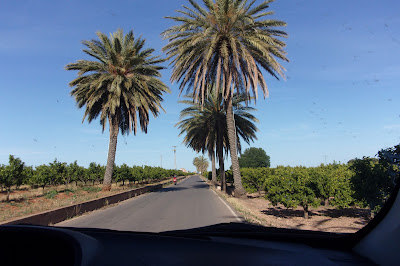 We visited the impressive Tower of Benavites, where we climbed the wooden barreras that protect most of the people from the bulls. While I was sitting on top of the barreras I wondered if the bulls could grab a person by the pants and pull him down. Frightful thought! 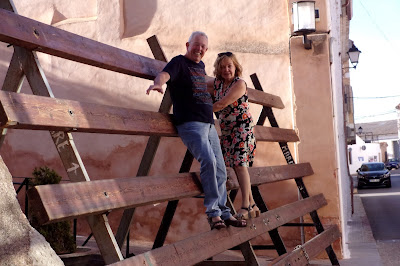 One of the things that impressed me about Valencia and the Valls is its music: the many musical events throughout the area and the variety of music that is heard. I was fortunate to attend four musical events, two of which I will mention here. First I was fortunate to attend a concert at the Palau de la Música by the sixteen year old violin Valencian prodigy Jacobo Christensen, who delighted us with marvelously played music by composers ranging from J. Sebastian Bach to Enrique Granados.


For those students who are learning to play or want to learn the violin, I recommend you hear the recording “Violin—Jacobo Christiensen”. I have played the violin for seventy-five years, but I could never play half as well as Jacobo.


The other great concert that I wish to mention is the one by the renowned Banda Municipal de Valencia, held at the Jardins del Palau, and directed by Fernando Bonete Piqueras. Most of the music was familiar to the audience because it included a selection among the greatest music written for top movies like: Gone With the Wind, West Side Story, My Fair Lady, The Godfather, Fiddler on the Roof, Parque Jurasico and others. The second part of the concert included one of the old favorites in the United States, “Caravan”, by Duke Ellington. The outdoor theater was completely full, but my cousin Iraida convinced the concerts management to let me sit in the first row, as shown in the photograph.

On this trip I was very fortunate to see and tour one of the most beautiful villages in Europe; I’m referring to Albarracin, a town many of you have seen because it is so easy to travel to from Valencia and the Valls. A very knowledgeable tour guide walked with us and told us about its many ages and rulers, including the moors and several European nations. It was very interesting to see how Albarracin protected itself from attackers, using the surrounding river, the immense wall and its clever architecture. 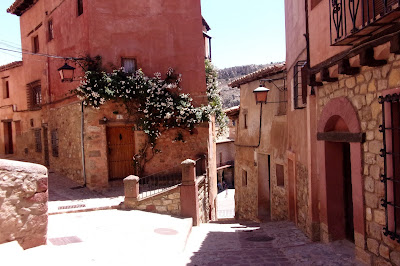 Artists could spend years creating paintings and photographs of the village seen from different angles and great structures like the Cathedral, the rose-colored houses and beautiful rock-encrusted streets and plazas. Currently I am using pastel crayons to paint a picture of a street-scene in Albarracin. Also, I’m framing a magnificent photograph taken by artist Luis Gil, showing Albarracin, high on the hills and surrounded by colorful trees in Autumn. 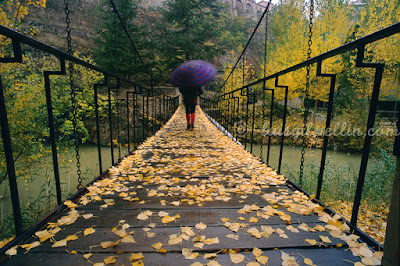 I spent the last two days of my vacation in Barcelona, one of the most dynamic cities of modern Europe. Since my last visit to that city with my wife Letizia in 1998 I notice the city moves faster and there are a lot more tourists. Jose Maria, a family relative was my wonderful guide, was born in Barcelona and knows every corner and building in the city. We delighted in walking Las Ramblas and many other streets, toured La Sagrada Familia and Gaudi’s home up on the hills. We dined in the well-known restaurant named “Caracoles”, where we ate a delicious paella that reminded us of the region of Valencia, where that world-famous dish originated. The trip was indeed an experience I will always remember. 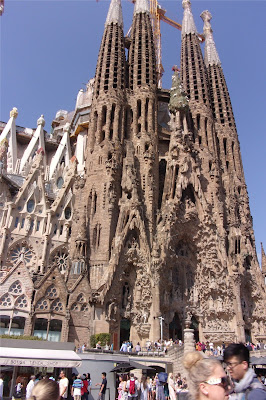 I thank my relatives and friends in Valencia, Quart de les Valls, and Barcelona for making it possible for me to have the most wonderful
días inolvidables.